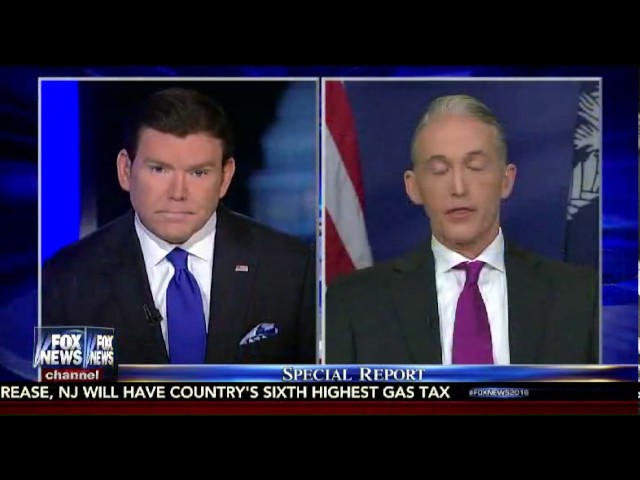 Harry Reid had made one of his patented lies in order to try to swing the election to someone as crooked as he is.  He claimed that an unnamed National Security official told him that the FBI had a mountain of dirt on Donald Trump and if the voters would hear it from the FBI, he would be finished.  Reid did something similar in 2012 when he said he was told by an unnamed source that Romney had not paid taxes in years,  We later found out that it was also a lie.

“In my communications with you and other top officials in the national security community, it has become clear that you possess explosive information about close ties and coordination between Donald Trump, his top advisors, and the Russian government.”

Trey Gowdy appeared on Fox’s Special Report with Bret Baier.  He ripped Reid a new one with this comment:

“Thank God he’s leaving is my initial reaction. My second reaction is I didn’t know Mormons use drugs.”

Yesterday, the New York Times ran a story that after a long thorough investigation, the FBI did not find one scrap of proof that Trump has connections to the Russian government or the Russian bank liberals have accused him of.  That totally destroyed Reid’s lies.  The RNC should demand the name of the national security officer Reid claims he spoke to, so he can be punished for passing on lies.