Sometimes BIG-BROTHER works against the bad guys. It certainly helped this woman to chronicle an assault and her fight against it.

WHAS11.com LOUISVILLE (WHAS11) — A mountain of evidence including surveillance video and crime scene photos paint a suspenseful picture of the January night a man is suspected of trying to rob a woman at knife point but is instead shot by the would-be victim.

One of the videos, captured in the Fourth Street Live food court, shows the woman walking into frame at 6:13 p.m. the night of Jan. 26. Twelve seconds later, a man who police said was John Ganobick, walks into frame behind the woman.

Another video, which does not have a timestamp and is from the waiting elevator, shows the woman getting on the elevator on the third floor. The man follows and stands behind her.

“The victim asked the suspect what floor he needed, and the victim described the suspect as being out of it, possibly high or drunk, but when he said the sixth floor, the victim stated she became nervous,” a police narrative said.

For the entire 13 second ride to the sixth floor, neither person looks at each other, according to the video.

The woman can be seen leaving the elevator to the left. The man gets off the elevator, looks right, and then walks in the same direction as the woman. 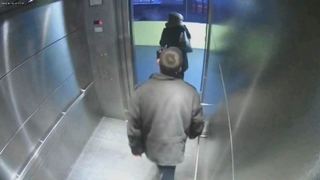 “When the elevator opened on the sixth floor, the victim state she began to run to her vehicle, which was parked about 10 spot away from the elevator. The victim stated the suspect gave chase,” the narrative added.

What the victim and police said happened next was not captured on video, but described in the narrative.

The woman, who WHAS11 News confirmed works in the legal field, was able to get to her car, but when she was trying to get in, the man banged her head on something unknown and pushed his knee into her chest, the record said. A crime scene photo shows cracks in the woman’s windshield, but it is unclear if that is where she was injured. The narrative said the attack forced the woman across the center console inside her car.

It continued by saying the man pulled a knife and demanded the woman’s money.

The woman told police the man stopped demanding money and ordered her into the car and pushed her toward the passenger seat.

“The victim stated she was afraid that she would be raped or murdered and as she fell across the passenger seat of her vehicle, she was able to reach into her purse and grab her gun and attempt to fire a shot at the suspect,” the narrative said.

The gun, the record said she told police, didn’t fire at first and the attacker hit her in the face and held a hand over her mouth with one hand and was moving the knife toward her with the other.

“Fearing for her life, the victim kept pulling the trigger of her gun, which finally fired, and struck the suspect in the neck.” 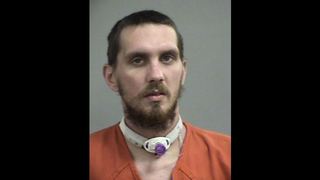 It was enough to send the attacker running. Out of fear, she was determined to keep him away, the narrative added.

“The victim described being afraid that the suspect was turning to come back at her and she kept pullig (sp.) and struck the suspect in the buttocks.”

A video on the first floor of the parking garage later shows the suspected attacker coming out of the stairwell. A still frame of the video shows a passerby, who appears to notice blood coming from the man’s neck and follows him.

The caller can be heard asking the injured man if he knew who shot him.

A video from the lobby of the PNC Plaza building shows the injured man sitting on a couch when sheriff’s deputies and later police arrive.

The Louisville Metro Police officers who responded were wearing body cameras; however, because the footage was not immediately made available by prosecutors, it is unclear what conversation between the man and police may have transpired.

Evidence photos show police found a rusty steak knife in the stairwell. Police also recovered the woman’s gun, which she had an Indiana concealed carry permit for.

Detectives interviewed Ganobick Feb. 16, but the interview was not made public by the time this story was published.

He is expected to return to court March 16.