A woman in Brighton, Michigan, has begun a global hunt after finding a disturbing note in a package of Tinkerbell underwear she ordered for her daughter.

WXYZ reported that Nicole Perez bought the package at a “Mom-to-Mom” sale this past weekend. She thought she was a getting a bargain, but she was getting something much worse.

Inside the package, Perez found a handwritten note that said “Help me! Plz” The note had “MaryAnn” written on the back along with a phone number and “Location: Philippines.” 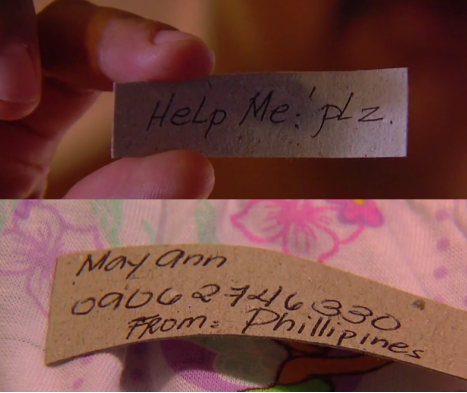 The underwear is labeled has having been made in the Philippines. The company behind the underwear is “Handcraft Manufacturing Corporation,” based in New York.

“I was terrified. I just felt like everything just dropped to my stomach,” Perez stated.

Perez emailed the manufacturer and she got back an apology and an offer for a new pack of underwear, a standard corporate response to any customer complaint.

“You’re wondering if this is forced labor, if they’re just working long hours, they’re putting these underwear together and clearly someone is reaching out for help and so you think about your own kids and you hope that this isn’t the case,” Perez said.