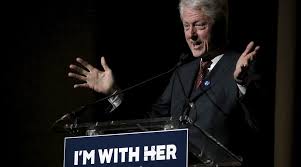 Bill Clinton defended Hillary up to a point on favors granted to donors to the Clinton Foundation.  Bill readily admitted that some donors to the Foundation was looking for access and favors.

“Well since we had more than 300,000 donors, it wouldn’t be usual if nobody did. But the names I saw in the paper—none of them surprised me and all of them could have gotten their own meeting with Hillary. You know when you have been doing this kind of work for as long as we have, you know the people who are the major players. And also some of them who call my staff—people were doing double duty back then and I had an office of the former president—when it was natural for people who’ve been our political allies and personal friends to call and ask for things.”

When he was asked if he ever took precautions against that possibility:

“And I trusted the State Department wouldn’t do anything they shouldn’t do, from a meeting to a favor, and so it didn’t surprise me that people would call from time to time,” he continued. “And maybe some of them gave money for that reason but most of them gave it because they liked what we were doing and because they knew me. And after she came on to the foundation for a couple of years they knew her. I mean Melinda Gates didn’t get involved in the No Ceilings project with Hillary because she needed to support her, or me, or the foundation for access. She did it because the Gates Foundation cares about trying to elevate the standing of woman and girls in America and throughout the world, and that’s what they did with No Ceilings.”

Bill pushed the blame on the State Department.  He trusted them to do the right thing, therefore if the wrong thing was done, he didn’t do it.