He flew to the US to stay with family members just days after he helped care for a friend who was stricken with Ebola in Liberia, The New York Times reports.

Duncan then started developing symptoms of the disease once he arrived in the US. He went to a Dallas emergency room and told a nurse that he had recently been in West Africa — a region that has been ravaged by an unprecedented Ebola

epidemic — but that information was not “fully communicated” to the rest of his medical team. Duncan was diagnosed with a minor infection and sent away from the hospital.

He returned days later via ambulance, when his symptoms had worsened considerably. Duncan is the first person to be diagnosed with Ebola in the US. 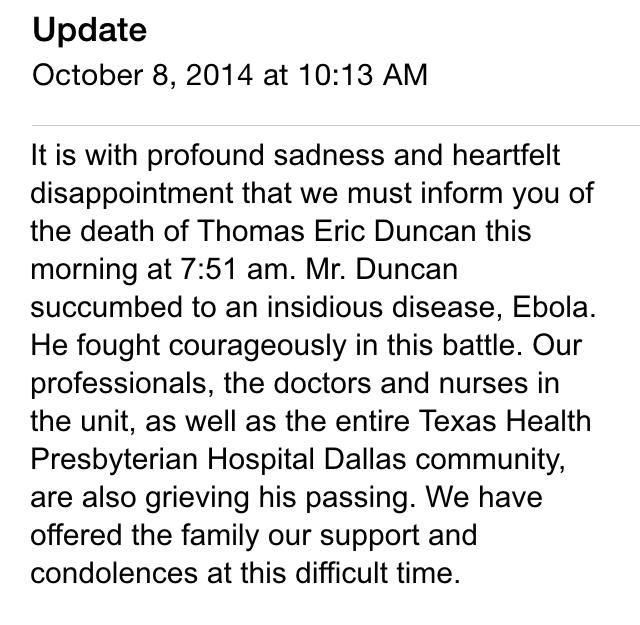 Obama Ebola Bumper Stickers Appear Around Los Angeles UPDATE: You can purchase these bumper stickers here. (by Truth Revolt) — Vice President Joe Biden held up traffic around Los Angeles for a second day on Tuesday, but it was President Obama himself on the minds of […]

VIDEO– Washington press conference Caught with ANOTHER HOT MIC!! This time about Ebola….. ‘ We Are All Screwed’

White House, senior administration officials hold a briefing on the U.S. government’s response to the Ebola epidemic. At the end of the briefing not knowing his microphone is switched on, Major Garrett can be heard saying to two other White […]

BREAKING: Connecticut Governor Declares State of Emergency Over Ebola as a Precaution

The order gives the state the authority to quarantine and isolate people who may have been exposed to the virus  Connecticut Gov. Dannel Malloy has declared a public health emergency for the state as a precaution during the Ebola epidemic that is […]

BOMBSHELL: Top Ebola Scientists Say CDC Clueless, Ebola Strain ‘Like None Seen Before And May Well Be Airborne’

U.S. officials leading the fight against history’s worst outbreak of Ebola have said they know the ways the virus is spread and how to stop it. They say that unless an air traveler from disease-ravaged West Africa has a fever of at […]

Spreading from the heart of West Africa to the cowboy capital of the world, the ongoing Ebola epidemic shows no sign of abating. Hitting half a dozen countries in as many months, here’s a brief timeline of the worst public health crisis […]

President Obama announced Monday, after meeting with top health and security officials about the Ebola outbreak in Africa, that the U.S. government is preparing additional measures to screen passengers in the U.S. and overseas as part of the expanding effort to contain […]

Regulators in the United States have approved an experimental drug for treating patients suffering from the Ebola virus one week after health officials in Dallas, Texas diagnosed a Liberian national with the deadly disease. On Monday this week, drug makers Chimerix announced […]

Ebola Healthcare Workers Are Dying Faster Than Their Patients

When Dr. Olivet Buck became the fourth Sierra Leone doctor to die from Ebola after she was denied evacuation, the third American healthcare worker to contract Ebola in West Africa was well on the way to recovery back in Omaha, Nebraska. For many African healthcare […]