A company in Canada canceled one woman’s second job interview after she inquired about the benefits and compensation for the role.

“Your questions reveal that your priorities are not in-sync with those of SkipTheDishes,” reads the email HR wrote to Taylor Byrnes, BuzzFeed reports. “At this time we will not be following through with our meeting this Thursday.”

In a follow-up email, the company continued, “We believe in hard work and perseverance in pursuit of company goals as opposed to focusing on compensation. Our corporate culture may be unique in this way, but it is paramount that staff display intrinsic motivation and are proven self-starters. For these reasons, questions about compensation and benefits at such an early stage is a concern related to organizational fit.”

A shocked Byrnes took to Twitter in response, where news of the incident quickly went viral.

Applied for a job at @SkipTheDishes. They cancelled my interview b/c I asked about wages/benefits @CBC @CBCNews @ctvwinnipeg #boycottSkip pic.twitter.com/CjBdnFvY1P 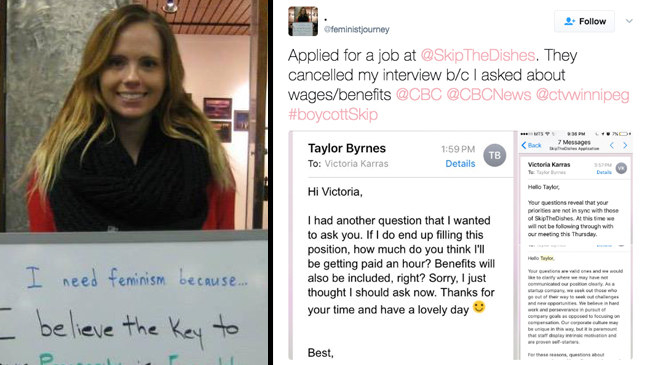 “I loathe that hiring processes still force us to pretend money isn’t the primary reason we want jobs,” responded another person.

Many used sarcasm to shame SkipTheDishes, a startup food service company that was bought out for $110 million in 2013.

“I guess wanting to eat is overrated these days,” wrote one.

“We’re really looking for more of a one-sided relationship where you care about us and we don’t care if you starve and die,” added another.

SkipTheDishes co-founder Joshua Simair quickly apologized for the email from the response, inviting Byrnes once again for a second interview.

“The email sent to Taylor was wrong and does not represent our team’s approach or values,” Simair said, adding the company will provide further training to its staff. “We are very disappointed in how it was handled. We do share a compensation package prior to hiring.”

It’s not clear whether Byrne will attend the interview, but some questioning the company’s integrity think she shouldn’t.

“I wouldn’t want to work there anymore if i were her,” wrote one BuzzFeed reader. “Their stance proves they’re dishonest when they can’t be upfront about wages and benefits.”

“Also they only decided to change their opinion once it affected them negatively,” added another in response.

Even if SkipTheDishes is being honest, others thought such a mistake still reflects poorly on the company.

“I would not be willing to work for a small company where one hand doesn’t know what the other is doing,” commented another person.

Does Canada have a version of Gloria Steinem?  Is she better looking?  Kidding.  No really, I’m just kidding.