Plaintiffs challenge regulations promulgated by the Army Corp of Engineers that govern the possession of firearms on property administered by the Corps. Plaintiffs argue that the regulations violate their Second Amendment right to keep and bear arms.

The regulations govern over 700 dams — holding back more than 100 trillion gallons of water — built by the Corps, and the surrounding recreation areas that serve over 300 million visitors annually. Adopted in 1973, the regulations were intended to provide for more effective management of the lake and reservoir projects. The regulation at issue here reads as follows:

(a) The possession of loaded firearms, ammunition, loaded projectile firing devices, bows and arrows, crossbows, or other weapons is prohibited unless:

(1) In the possession of a Federal, state or local law enforcement officer;

(2) Being used for hunting or fishing as permitted under § 327.8, with devices being unloaded when transported to, from or between hunting and fishing sites;

(3) Being used at authorized shooting ranges; or

(4) Written permission has been received from the District Commander…. 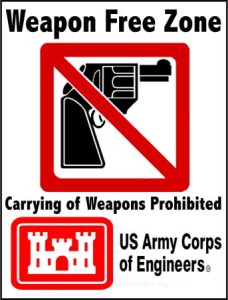