Ever get so angry you wanted to smash something?

A gamer in China who lost a League of Legends match was so mad with his teammates, he smashed his head through his computer monitor.

Online gaming matches can be an intense experience for many serious gamers. You practice constantly to be the best at your game, and egos rise with the skills you’ve created. You build a team and work out what you believe are the best strategies. You win match after match, moving up the ladder and defending your title. And then one day, when you lose a match, it can be a great letdown, emotionally and spiritually. A real morale killer. Especially if you start to think your teammates let you down, because how could it possibly be that the winning team was just better? That’s when instead of you playing the game, the game played you. And that’s when it’s time to take a deep breath and walk away for a while.

The gamer was playing at an internet cafe in the city of Lanzhou.

Needless to say, he received head injuries — and the screen was also left with a pretty sizeable hole.

According to the Lanzhou Morning News, the shop owner confirmed that the event occured last Thursday. 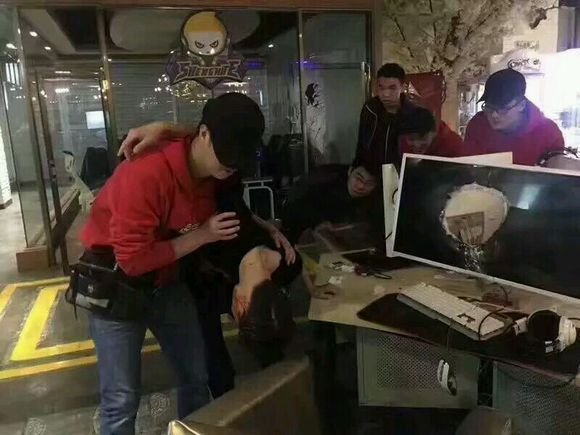 “Wow what material is his head made of? Steel?” one asked.

But it’s this user that really says what we’re all thinking:

“Is this really necessary? It’s just a game.”