Joy Behar is at it again! This time she takes on Joel Pollak Senior Editor-at-large for Breitbart News. He has no problem putting her right in her place and dismantling rumors about Breitbart News while he does it. Take a look at the video down below for the full conversation.

BEHAR: Breitbart—the website has been described as a platform for the alt-right or some say white supremacists. How would you describe it?

POLLAK: Breitbart News is a conservative website and we have a very diverse group of editors and writers. I’m the orthodox Jewish former editor-in-chief, senior editor-at-large. So not exactly an accurate description. We call that fake news, a fake news description. But we are —

BILA: That it is white supremacists.

BEHAR: No no no. That is not fake news.

POLLAK: It was written by David Horowitz, who is one of the most prominent Jewish conservatives. He was criticizing Bill Kristol for not being Jewish enough, so it was the opposite of what people described. And we have more than a dozen Jewish people working at Breitbart including the CEO, COO. We have Black writers, Hispanic, Asian, whatever, gay, whatever you can imagine.

BEHAR: What do you think is the rise of anti-Semitism about in this country?

POLLAK: I’m really glad the media finally woke up to this phenomena. It started quite a long time ago, long before Donald Trump ran for president, particularly in California where I live, on college campuses, there’s been a rising tide of anti-Semitism linked to far left-wing criticism of Israel. It’s very tough to be a Jewish student on some of these campuses nowadays.

BEHAR: Mostly, it seems to me that there’s a flurry of them since Trump is in.

POLLAK: I think the media just woke up and noticed that this is a problem.

POLLAK: And I think that I feel very proud that Donald Trump not only is one of the most pro-Israel presidents that we’ve ever had, but his daughter Ivanka tonight will light the Sabbath candles just like my wife will, and bring in the Sabbath. To me, that is something extraordinary in America history.

BEHAR: But you know that phrase, one of my best friends is Jewish, it’s meaningless really. You can still be an anti-Semite and have Jewish relatives.

POLLAK: I agree with you. When people say my friends are Jewish, it doesn’t cut it.

HOSTIN: Or I have a black friend.

POLLAK: But when your in-laws are Jewish, you have a little more credibility.

HOSTIN: Let me ask you about Steve Bannon. Whoopi calls him President Bannon. He’s the White House chief strategist, former executive chair of Breitbart, people have called him everything from a Nazi to a racist. He’s made bigoted statements. They’ve called him a white supremacist sympathizer. What’s your response? How do you work for someone who has that reputation?

POLLAK: None of that is true. That’s more fake news and even people who —

HOSTIN: So everyone is lying?

POLLAK: Yes. Steve is a fantastic guy. I worked with him for six years and he can be very tough in an argument. We used to argue all the time over any kind of policy issues. Jedediah will back me up here. You bring data and facts to the table —

HOSTIN: So we can’t believe when he makes these bigoted statements, is he just being provocative?

POLLAK: What statements are you talking about?

HOSTIN: There’s a laundry list. I can get you a card.

BEHAR: Here’s a headline from Breitbart. ‘Birth Control Makes Women Unattractive and Crazy.’ Do I look crazy to you?

POLLAK: You see how you’ve shifted the goal post now. So, it’s gone from Steve Bannon says things to, “Oh, there was a headline.” Steve Bannon has not said bigoted things.

BEHAR: But he’s behind these though. What are you talking about?

BILA: I submitted content a long time ago to Breitbart and I know Steve and I’ve often argued that you can disagree with him, and it’s tough to disagree with him because he’s a strong headed guy, but I don’t believe him to be an anti-Semite or racist. He’s tough though, so if you go into battle you better be prepared. I have a question about Steve, which is that Steve is from what I know of him, he is kind of a boss. He does like to take control. He does like to be kind of in charge, and I see a lot of what’s coming out from the Trump campaign now. A lot of the focus seems to be about going against the media establishment. That is Steve’s main focal point. Is it safe to assume that Steve is kind of running the show?

Breitbart steps in and saves the day... 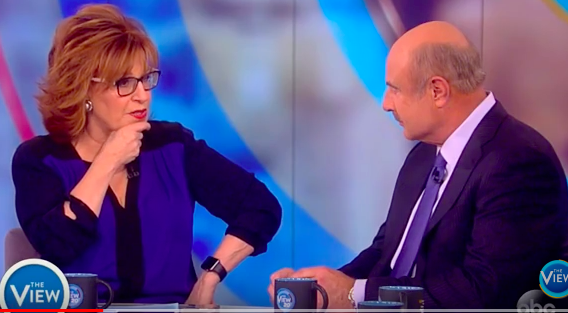