Washing the car is one of the most miserable jobs in the world, especially for a boy too young to drive.  One young man decided to liven up the chore with seductive dance moves that although they weren’t very sensual, were a barrels of laughs.  This is definitely worth the watch.

A father who left his teenage son alone to wash his beloved car got more than he bargained for when he checked security footage.

Chris Assogna expected to catch his 16-year-old boy Domanic talking his Holden Commodore SS for a drive, but instead watched him putting on some dance moves.

‘That moment when I ask my 16yr old son to wash my car while I go get dinner and come back home and check my footage to see if he has taken my car for a drive,’ the Canberra man wrote on Facebook. 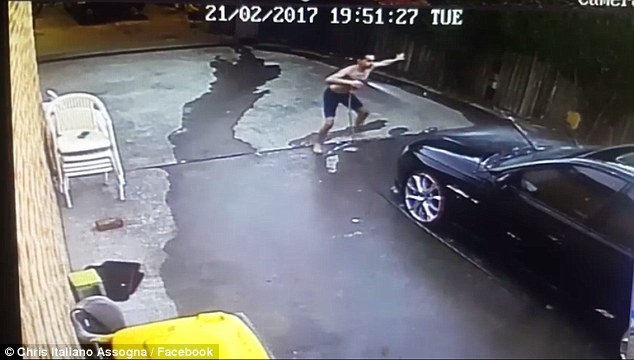 After finishing the chore, Domanic makes it clear he knows his father will be watching as he stared directly at the camera while he put on a show.

The youth sprayed himself with the hose before wiping the water all over his bare chest as raunchily as possible while swaying his hips side to side.

He finished his hilarious routine by spraying the top of his head and pointing directly at the camera before walking off screen.