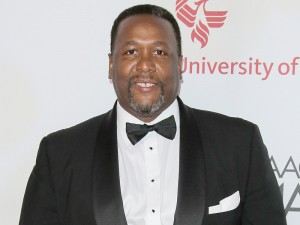 Actor Wendell Pierce, a macho Hollywood liberal was arrested for attacking a woman by pulling her towards him by the hair and hitting her in the head.  Pierce is best known for  his role as Baltimore Police Detective William “Bunk” Moreland on “The Wire” and playing Clarence Thomas is the HBO fiction movie, “Confirmation.”

Pierce struck up a conversation with a man and his girlfriend and they were talking, when the woman revealed she was voting for Bernie Sanders.  Pierce became enraged and pushed the boyfriend out of the way and grabbed the woman by her hair and hit her in the head.  The couple went back to their room and contacted hotel security, who in turn called the police, who arrested Pierce.  Pierce is a strident Hillary supporter and I guess he decided to join in her “War on Women.”

Pierce was taken into custody, processed and then released on $1,000 dollar bail.  The police will release the arrest report as soon as it’s completed.  Pierce has been charged with  suspicion of battery.

This Couple Demonstrates Their Sex Drive at...