While members of congress continue to act like a room full of 3 year-olds, some in our country have followed the lead of President Trump and are trying to “Make America Great Again”. Despite the lack of leadership coming from our elected officials in the House and Senate, businesses are trying to fill the vacuum. This week, Ford announced they are about to launch a new investment plan that will increase production in three of their plants.

That’s right, Ford Motor Company is about to invest over 1.2 billion dollars in three Michigan facilities. A company spokesman said Tuesday it will invest $850 million to retool its Michigan Assembly Plant in Wayne for truck and SUV production; $150 million in its Romeo Engine Plant to expand capacity; and $200 million to build a data center at the company’s Flat Rock Assembly Plant. Ford had previously announced the Flat Rock facility would see a $700 million investment and 700 new jobs to support the production of electrified and autonomous vehicles. 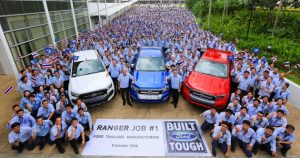 The corporate spokesman told media the investment in the Romeo facility will “create or retain” 130 jobs. The announcement came as President Donald Trump pushes U.S. and foreign automakers to build factories and add jobs in the U.S. Ford has announced $1.9 billion in investments in Michigan in the past three months.

Just how big is this news? Well Steve Arwood, CEO of Michigan Economic Development Corporation, said: “That probably nets out to be the biggest day ever in Michigan. That’s all good news. There’s not a discouraging word.”

The announcement even drew praises from the United Auto Workers. Who’s Vice President Jimmy Settles said in a statement: “We look forward to celebrating more product investment and job growth at each of our UAW represented facilities in the months and years to come.”

Ford’s announcement comes less than a month after President Trump, while speaking at the American Center for Mobility earlier in March, teased an upcoming auto industry announcement, but did not give details.

“We want to be the car capital of the world again,” Trump said in a speech to autoworkers. “We will be, and it won’t be long, believe me. … We’re going to have a very big announcement next week having to do with your industry. Very, very big. Very important.”

Just think what we could accomplish, if we could just get our elected Representatives to cooperate and work together for the good of the country instead of their own campaign funds and power.