Do they have any shame?

She did her best to break the internet with her full frontal nudity in Paper Magazine.

And now Kim Kardashian has done it again – and this time she is holding nothing back.

A new photograph, apparently leaked from an upcoming edition of Love magazine, shows the reality star standing in a doorway, her naked waxed body glistening with baby oil.

Hands on hips, staring out, Kim wears just a pair of geek-chic spectacles, a fur coat thrown wide open, and a self-confident stare.

The picture is shot from low down, making the 34-year-old’s total nudity even more prominent.

Her hair is greasy and styled in loose curls left hanging around her pouting face.

This is not the first picture to leak from the yet to be released shoot with the British publication.

While the issue of Love featuring Kim has yet to hit newstands, the pictures are thought to have been shot by Steven Klein for the Spring/Summer 2015 issue, on stands February 9.

Advance images officially released show Kim lounging at the edge of a pool with a blow up doll embracing her on a lilo, wearing a floral Prada playsuit, paired with towering red Miu Miu mules.

Others show her lying on a mattress, and slumped in a phone booth under a coat.

Love editor-in-chief Katie Grand styled the shoot with clothes custom-fit for Kim by Miuccia Prada, with hair by Akki and makeup by Stephane Marais.

While the issue of Love featuring Kim has yet to hit newstands, the pictures were possibly shot by Steven Klein for the Spring/Summer 2015 issue, on stands February 9

Official image: Love editor-in-chief Katie Grand styled that shoot with clothes custom-fit for Kim by Miuccia Prada, with hair by Akki and makeup by Stephane Marais

All covered up! ‘Sometimes it’s good to keep a little bit of mystery — like Kim does in her picture by Steven Klein where she’s hiding under a coat,’ Grand said of the shoot 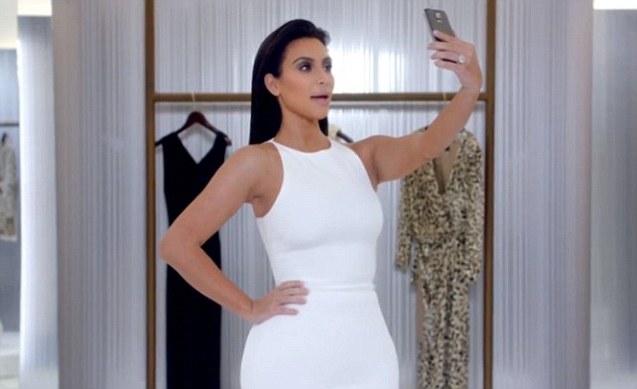 ‘Sometimes it’s good to keep a little bit of mystery — like Kim does in her picture by Steven Klein where she’s hiding under a coat,’ Grand said of the shoot.

‘It’s Kim as you’ve need seen her, hiding from the camera’s glare, not giving much away.’

But Grand’s comments certainly don’t reflect the leaked nude images from the shoot.

The explicit photographs seem something of a departure for the mother-of-one, who is married to rapper Kanye West.

For despite initially finding fame with a ‘leaked’ sex tape with then boyfriend Ray J, Kim has since worked extremely hard to rebrand herself to appeal to America’s conservative middle classes.

As viewers of her inescapable reality shows will know she takes pains to stress her Christian faith, close family ties, and clean lifestyle – not even drinking or smoking.

Breaking the internet: Back in November, Kim shocked when she posed full frontal for Paper magazine in November; now it appears she has done it again 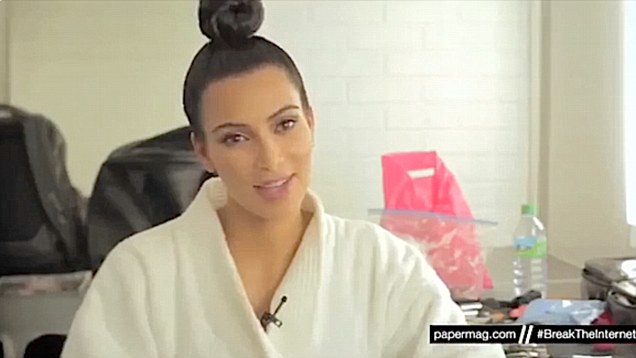 But as the November shoot for Paper magazine showed, Kim’s wild side is not extinguished.

And if anyone wondered whether the newlywed had to be talked into posing for the naked shoots, they can think again.

In an interview published on Yahoo Style, Paper’s editorial director Mickey Boardman explained that the full frontal nudity was all down to Kim.

‘And it was her idea to take off her clothes and show more than her butt. But we [Paper] didn’t say “let’s do a cover with your butt hanging out.”

‘She said she was willing to take her clothes off and one thing lead to another.’