A woman who has been drug free for six years says when she walked into a convenience store on Sunday, some signs brought back the nightmare of addiction all over again.

The woman says the hand-written signs were above an aluminum foil display inside the Save Way Mini Mart along West Broad Street in the Hilltop.

The sign reads: “Attention junkies, go ahead and steal a piece of foil. Just go ahead and make sure you overdose. Thank you.” 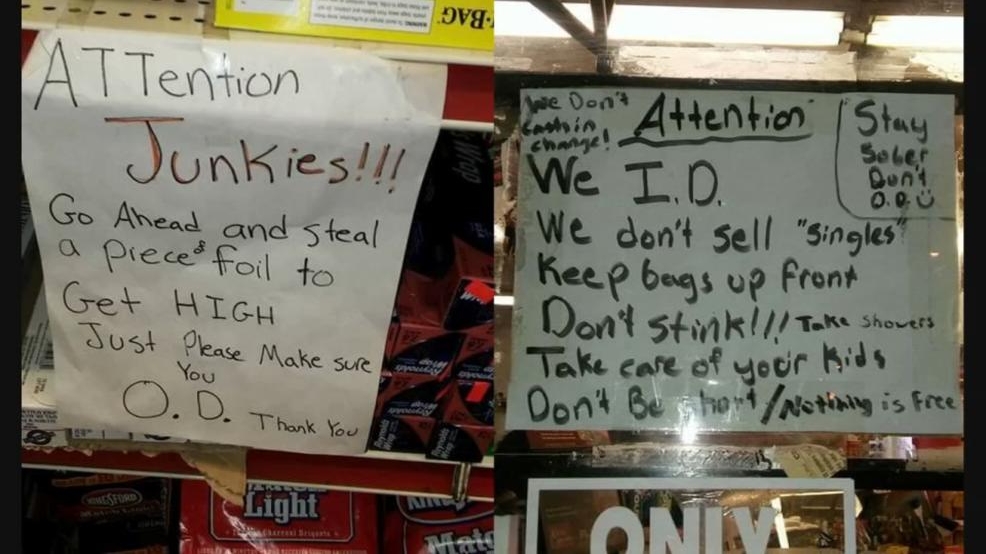 The shopper says there’s a reason why the foil is such a hot item to be stolen.

“They’re using it to hold heroin in a lighter. It melts the heroin and they can smoke it or place it in a needle and suck it up from the aluminum foil.”

She says a sign she spotted on the front door wasn’t much better.

She says it reads in part: “Keep bags up front, take showers, take care of your kids, nothing is free, don’t OD.”

WSYX/WTTE spoke with the store owner and employees who say they put up the signs long ago as a last-ditch effort to help cut crime and shoplifting.

The woman says she fears that someone addicted may take the signs literally and has asked the store management to rephrase their warnings in a more polite manner.

Management didn’t want to speak on camera, but say they meant no offense, and that they signs aren’t going to be taken down.

Drug addiction is rampant in the U.S. Regardless of how you feel about it, chances are you know someone who is struggling with it, or has died as a result. The store owners say they meant no offense?

I personally have lost several friends from it, and the heroin that is everywhere scares the hell out of me, since I have an 11 year old son.

I feel that people should try to help the situation instead of ridicule the people that are sick. What do you think?

Here is a related post that I did a while ago…