What do you do if your neighbor wants you dead, and decides to go on a hunger strike until he can get enough support from others to accomplish the job? Well, if you are an Israeli activist, and your neighbors are a bunch of Muslim Terrorists, you hold a barbecue were the sight and smell of all the food will drive them nuts. That is what happened on Friday.

Muslim Protesters were demanding that Israel put an end to the imprisonment of suspected terrorist being held without trial. But these were not persons calmly sitting hat home watching the football game when police arrested them. They are all persons that were present at terrorist activities and rock throwing incidents over the last 2 years of the latest Infantata, called for by Palestinian militants. 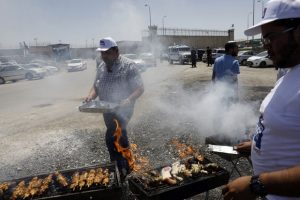 Earlier in the day, Jewish activists organized a free barbecue outside several of the military prisons that were holding many of the Muslim Terror suspects engaged in the mass hunger strike. Free food was given to prison employees as well as anyone else that showed up for the feast.

One prisoner was asked if he thought the free barbecue made things more difficult for the prisoners engaged in the hunger strike. The man who has been locked up for Terrorist activities for about 15 years told the reporter: “Yes it does. Hunger striking is the most peaceful form of resistance available. It inflicts pain solely on those who participate and on their loved ones, in the hopes that their empty stomachs and their sacrifice will help the message resonate beyond the confines of their dark cells.”

He went on to say that: “ In response to this, Israeli activists thought it would be nice and funny and clever to inflict more cruelty on these people who are starving to death in prisons by wafting smells and aromas, cooking in front of them, mocking them.  It is abhorrent. There is a major civil rights and human rights catastrophe in Israel with increasing human rights abuses against Palestinian prisoners.”

Another prisoner, wrote an op-ed which appeared in the New York Times recently where he talked about deaths, tortures, inhuman treatment, removal of family visitation rights; the fact that lawyers are unable to defend their clients in an attempt to gain sympathy for the alleged terrorists. He pointed out that some of those held were only 10-, 12-, 14- year-old kids; kids who have been imprisoned for “just throwing stones at tanks and armed military police.”

If you have ever been hit in the head by a baseball sized rock, it hurts. Just last summer, three police officers where taken to the hospital with sever injuries when they were struck by such rocks in Berkeley, California Riots. But Muslims would have the world believe that such action is just kids being kids.