You certainly don’t see anything like this walking down Main Street. And with the looks of this thing, I’m not sure I would have had the guts to pull it out of the water, much less eat it.

The giant Oarfish was caught on April 19 off the coast of Taiwan. It was then spotted a few hours later being cut up ready to be cooked. Oarfish are longest bony fish alive and are found at deep levels of the sea

Fishermen in Taiwan got the shock of their life when they caught a giant oarfish.

The mega-fish which was caught of the Taiwanese coast on April 19 measured 16 feet long, the People’s Daily Online reports.

It was then seen being cut up on the street ready to be cooked. 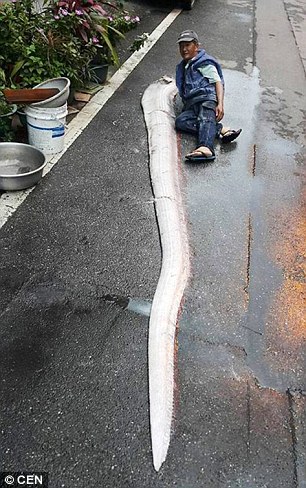 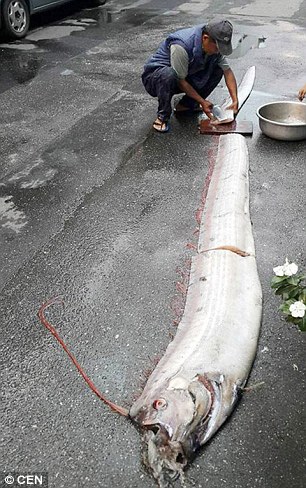 Monster of the deep: Fishermen in Taiwan got a shock discovery when they came across a giant Oarfish

According to reports, local residents suspected the deep-sea creature had been sent to surface after two earthquakes occurred off the Taiwan coast in the early hours of April 19, a couple of hours before the fish was caught.

The Oarfish is the longest bony fish alive and can grow up to 36 feet in length.

It is usually found in temperate to tropical oceans yet it is rarely seen on the surface.

The fishermen say that they have caught Oarfish before however they have never seen one this big.

Fishing is a controversial topic in Taiwan.

Earlier this year, authorities in the country were left to investigate after 60 baby sharks were discovered stripped of their fins and left on an embankment to die.

According to local media, the baby sharks had a maximum body length of 27 inches with the smallest measuring 11 inches.

Local residents suspect that the fins were taken to be used to make shark fin soup and the carcasses were then dumped.