Thousands gathered in grief tonight after a British-born father and three American citizens were killed by Palestinian terrorists armed with axes and guns in a Jerusalem synagogue.

They were slaughtered in a dawn attack by two cousins who screamed ‘god is great’ as they attacked at random.

Victim Rabbi Avraham Shmuel Goldberg, described as a ‘pillar of the community’, was born in Liverpool and held a dual British-Israeli passport.

Mr Goldberg, 68, is a grandfather who lived in Golders Green in London before moving to Israel and was a regular visitor to the synagogue.

Friend David Osborne told Jewish News: ‘He was the most wonderful person you could meet, a pillar of the community. I was on my way to the synagogue when I heard screams and shots being fired, I knew instantly it was bad.’

The others killed in the attack have been named as Rabbi Moshe Twersky, Rabbi Arieh Kopinsky, 43, and Rabbi Calman Levine, who were all dual US-Israeli nationals. The two terrorists were shot dead after the attack by police.

Thousands of people attended a funeral for Twersky at the Torat Moshe yeshiva in Sanhedria early this afternoon, which was closely followed by a joint funeral for Kupinsky, Levine and Goldberg before sundown – the latter held outside the synagogue where the attack occurred. 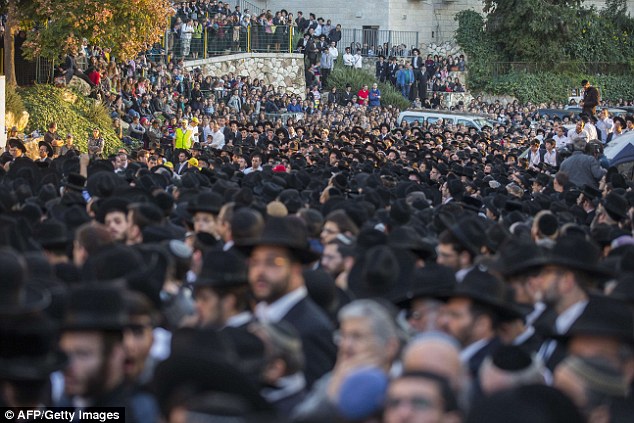 Thousands of people attended a joint funeral for Kupinsky, Levine and Goldberg before sundown – held outside the synagogue where the attack occurred