In Testimony today, a teacher told the court how she was attacked and repeatedly assaulted by eight Muslim men, all of which are refugees. According the teacher, the attack occurred during New Year’s Eve celebrations.

The woman, 28, said she was drinking in a bar with a female friend when she was apparently “taken away” by four men. She said that she was led to an apartment where five more men were waiting to begin the “humiliating and agonizing” attack, which lasted for two hours.

Records show the men range in age from 22 to 45 and are all related to each other. The alleged attack is said to have taken place on January 1, 2016. At that time, five of the men had already been granted refugee status but the asylum applications of the other four were pending.

The Teacher says that following the alleged assault, one of the men took her to a bathroom in the apartment where he used his phone to take a photo featuring both of them. Then she was taken to a tram stop in central Vienna and left, she was subsequently hospitalized. 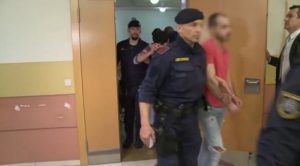 Previous to the beginning of the trial, one of the defendants plead guilty to the charge of rape. But the remaining eight men deny that any assault ever took place. In testimony, they told the court they feel “no guilt” and continued to deny the event, despite the existence of DNA evidence. One of the defendants even claimed the woman had been “offered” to them by relatives. Another one told the court that she was a willing participant in the evenings events.

A witness in the bar testified that: “Some men she had been talking with had taken her away”. The incident took place at about 3am after the woman and her friend had been drinking in a bar called Cactus. That is when the victim simply disappeared.

Even the victim concedes that she was intoxicated at the time, said she only remembers finding herself naked on a bed and being assaulted by the men. She says she shouted at them in German: “No, I don’t want this” and then in English: “Listen to me, just a little bit.”

But her alleged attackers spoke only in Arabic. Because the assault occurred in the dark she was not able to identify them, according to her lawyer, Karina Fehringer. Medical experts testified that the woman had in fact been raped multiple times, and suffered extreme bruising and abrasions. The victim was so visibly shaken that she was not able to face her alleged attackers at the District Court of Vienna.

Only one defendant has admitted to his role in the alleged attack, Mohamed Al-A, aged 31 has plead guilty to the charges. Sources said that during the proceedings he wept openly in court and said that although as a Muslim he did not normally drink alcohol, he had been “really drunk” on vodka at the time. He added: “This act is a crime in Iraq.”

He said he was in the Cactus bar with Nazar Al-J, Mohammed Al-T, and Alaa Al-J, who allegedly took the victim back to the apartment. The others – Hader Al-A, Mustafa Al-J, Nael Al-J, Marwan Al-J and Sabah Al-J – allegedly were waiting there expecting the four men to return with a woman.

If convicted, the men all face up to 15 years each in prison. The trial is expected to end next week.