Some are nail-biters, while others appear poised to be blowouts. With the U.S. Senate hanging in the balance on Tuesday, it’s been somewhat easy to overlook the gubernatorial races also on the ballot, but several could set the stage to impact the 2016 presidential campaign in a major way.

As a general point, governors have historically had a bigger advantage over senators in seeking the White House, in part because skepticism of Washington often prompts voters to seek an outsider.

Some of the most competitive gubernatorial contests — including Connecticut, Illinois, Massachusetts, Kansas and Maine — have little connection with what could happen in 2016, while others — Ohio, Wisconsin and New York — may directly affect it. Still other campaigns — Florida and New Mexico — could have a more indirect impact.

Here are six races and trends to watch for when the results pour in.

1.Wisconsin: Walker in the Margin of Error

Democrats in Wisconsin are pushing hard to defeat a likely 2016 GOP contender in a race where every vote could count.

Walker, a conservative who reformed collective bargaining for public employees in the state, survived a recall in 2012. He stands to be elected for the third time in four years in a blue state that hasn’t voted for a Republican presidential candidate since 1984.

The RealClearPolitics average of polls shows Walker with a very slim lead. However, a recent Marquette University poll showed him surging to a 7-point lead this week, after the two candidates had been locked in a statistical tie. The Rothenberg Political Report, a nonpartisan service that handicaps political races, rates this contest as a “pure tossup.”

If he survives the re-election battle, Walker could enter the GOP presidential primary season with a conservative record on most fiscal and social matters, said Barry Burden, a political science professor at the University of Wisconsin, Madison.

“He has a lot going for him,” Burden told TheBlaze. “He’s governor of a competitive battle ground state that usually goes Democratic. He’s from the Midwest, which is usually the most competitive area in a presidential race. What he has done in Wisconsin will resonate with Republican primary voters.”

But a Walker presidential campaign offers no guarantee he would carry the state, said Geoffrey Skelley, an associate editor at the University of Virginia’s Center for Politics.

“Nominating a Midwesterner may be the way the GOP breaks the Democrats’ seeming lock on the Electoral College by strengthening GOP fortunes in states like Ohio and Wisconsin, and perhaps even a state like Minnesota,” Skelley said. “Much will depend on national conditions. Walker would likely run better in his home state than a generic Republican, but it’s hard to say just how much better he would run.”

Unlike Walker, Ohio Gov. John Kasich – another a Midwesterner rumored to be interested in a presidential bid – looks ready to stroll to an easy re-election, leading Democrat Ed Fitzgerald by more than 20 points in most polls.

A decisive victory in the ultimate battleground state of Ohio could allow Kasich to make a convincing case about electability in November.

“Kasich’s chances would improve markedly if the establishment GOP is looking for an alternative standard-bearer,” Skelley said. “That is, if someone like [former Florida Gov.] Jeb Bush doesn’t run and some members of the establishment don’t want to back [New Jersey Gov.] Chris Christie.”

But where he calls home might not be enough, said Rothenberg Political Report deputy editor Nathan Gonzales.

“Ohio is important for math. John Kasich can say ‘I’ve been elected twice there,’ but that’s not enough,” Gonzales told TheBlaze. “He would have to carve out a niche for himself in a large field of Republican candidates. He’ll have to find something else to call his own other than being from Ohio. Sure, it’s better to be a Republican from Ohio than a Republican from Wyoming. But it’s not a golden ticket to winning the nomination.”

New York’s Democratic Gov. Andrew Cuomo – recently in the news for his handling of Ebola quarantine policy in his state – is leading GOP opponent Rob Astorino by more than 20 points in most polls.

Cuomo has been talked up as moderate enough to win a general election in 2016 — so moderate he had to fend off a challenger from the left in the Democratic primary this year. But he has dodged questions about how strongly he is considering the prospect of a presidential run.

Cuomo, like many other potential Democratic contenders, will likely wait to find out if former Secretary of State Hillary Clinton jumps into the 2016 race before entering himself.

“It’s hard to see him running against Hillary Clinton,” Skelley said. “If she runs, she’ll eat up a lot of New York money and Clintonista support, an important factor given Cuomo’s background in Bill’s administration [as secretary of housing and urban development]. However, if she opts not to run, then he may well be a candidate. But Cuomo has really damaged his credibility with the left, which may make it hard for him to win the support he needs to gain the nomination.”

4. Maryland: O’Malley’s Policies on the Ballot?

Maryland Democratic Gov. Martin O’Malley is seriously exploring a presidential bid even if Clinton is in the race, having said he would make a decision when his second term ends this January.

In deep-blue Maryland, the campaign is getting some attention from national political stars.

Christie, as chairman of the Republican Governors Association – who has ignored some Republican gubernatorial candidates – called the race competitive and returned to Maryland Tuesday to stump for Hogan. Meanwhile, Obama and former President Bill Clinton have been to the state to campaign for Brown, demonstrating Democrats are taking the contest seriously.

Though Browne has led by about 9 points in most polls, a Gonzales Research Poll released Monday showed Hogan within 2 points.

An upset Hogan victory, or even a closer-than-expected result in Brown’s favor, might be viewed as a harsh verdict on O’Malley’s eight years at the state’s helm, which might not reflect well on his national ambitions.

“If Maryland ends up reasonably close, it won’t reflect well on O’Malley, but really Anthony Brown would own the margin far more,” Skelley said. 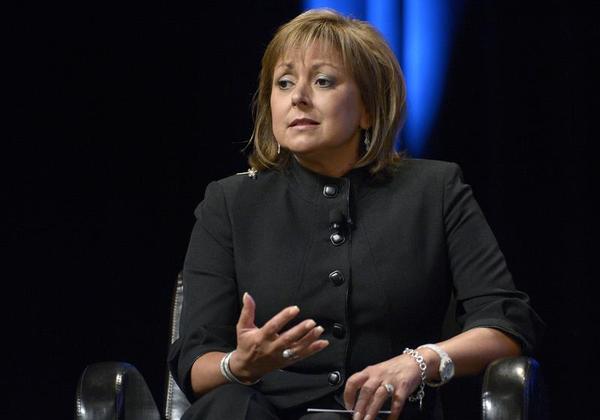 If not president, there’s always the No. 2 spot on the ticket.

Skelley thinks other states might be in play if candidates can prove their worth this year.

Michigan’s Republican Gov. Rick Snyder is in a toss-up race with Democrat Mark Schauer, but seems to be pulling ahead in a blue state that Republicans have longed to flip in a presidential year.

Nevada Republican Gov. Sandoval is coasting with a lead of more than 20 points over his Democratic rival.

“A lot of potential presidential candidates might end up being just vice presidential candidates,” Skelley said. “Snyder of Michigan comes to mind, as do Kasich or Walker, depending on how things shake out. Someone like Brian Sandoval of Nevada might also be attractive, given his Latino background in a swing state, though he’s probably too moderate for the GOP base.”

This may be the loosest connection to 2016, but the party that wins the governor’s mansion in a swing state can be of assistance in organization and fundraising for electoral important states.

Florida, famous for the 2000 presidential recount, went to George W. Bush in 2004, then twice to Obama, close each time. The Sunshine State with 29 electoral votes is where Republican Gov. Rick Scott and former GOP governor-turned-Democratic challenger Charlie Crist are in a dead heat. Crist seems to be gaining an advantage. The Rothenberg Political Report rates this a “pure toss-up.”

The governor’s race in Colorado between Democratic Gov. John Hickenlooper and Republican challenger Bob Beauprez was very close for much of the year until it seemed to be breaking in the governor’s favor last week. Polls this week showed it tilting back to the Republican challenger. Rothenberg rates it as “toss-up/tilt Democrat.” It’s a state that went Republican in nine of 10 presidential campaigns before Obama carried it twice, and was one of the most tightly contested states in the 2012 presidential race.

There are also less competitive governor’s races in Iowa and New Hampshire, two states that are not only the fist two nominating contests, but also tend to be hotly contested in the general election.

Iowa’s Republican Gov. Terry Branstad appears headed to a double-digit win, according to polls. It’s murkier in New Hampshire, where Gov. Maggie Hassan, a Democrat, has led her Republican rival Walt Havenstein by as much as 10 points, but a recent poll by New England College, however, said the race was tied.

“It might help, but winning a governors race during a midterm is no guarantee of winning the state in a presidential year,” Gonzales said. “If Scott wins Florida, it’s no guarantee for the Republican candidate. If Hickenlooper wins, it doesn’t mean Colorado is off the table for Republicans.”

Dad Mowing Lawn Noticed a Bald Spot in the Grass Near His Daughters’ Window. That Night He Discovered the Shocking Cause.

Netanyahu Responds to Senior Obama Official Calling Him a ‘Chickens**t’