Closed caption television caught a fight in a grocery store parking lot in Georgia that saw a man shot down in cold blood over a cellphone the suspect had sold.  As it turned out, the phone was locked and could not be used.  Kareem Mano, 25, met De’Andre Malik Thomas, 20 in the parking lot to get the money back his girlfriend’s sister had paid for the phone.

Once in the lot, the two men began arguing.  Mano had previously been holding a gun but tucked it away in his waistband.  Thomas then pulled a gun from his waistband and fired into the air before shooting Mano in the chest, then chasing his as he kept firing.  Mano was pronounced dead at the scene.  Thomas later turned himself in and is awaiting trial, being held with no bond.  Thomas was already of of jail on a bond of $65,000 for a breaking and entering last year.

Mano tries to run away as multiple shots appear to be fired at him as he is being chased allegedly by Thomas in the graphic video.

The video then shows Mano running towards a gas station pump, until he slows down and collapses to the ground behind a white Ford SUV.

The man wearing the red shirt immediately flees the scene, as the driver of the Ford SUV gets out and runs to help Mano before the video ends.

Davis said that at the time of the fatal shooting on Thursday, the suspected killer was already out on a $65,000 bond pending a trial in connection with a robbery last April.

The robbery occurred at student apartments located on the campus of Mercer University. 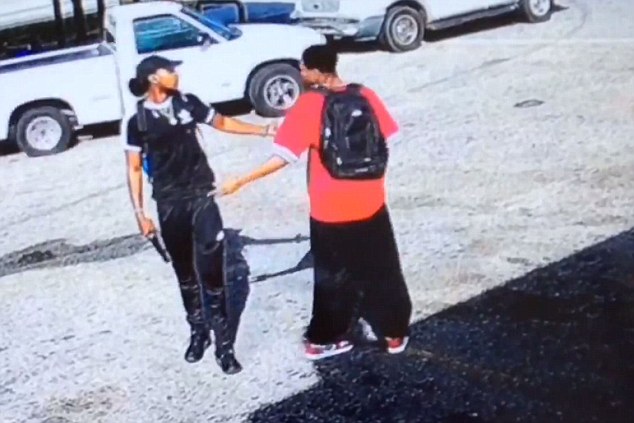 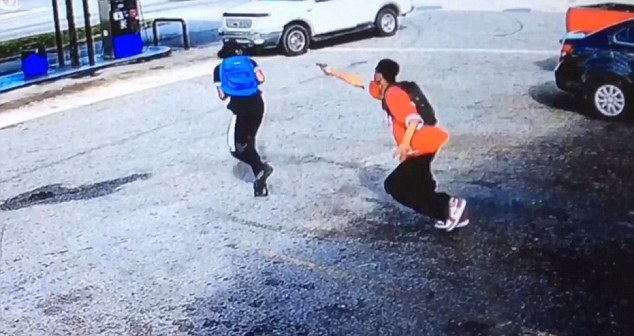