As you may know, the US Armed Forces is on the hunt for the next official Joint Combat Pistol for the entire US Military. Yes, it’s kind of a big deal…

Many veterans and 1911 fans never forgave the Department of Defense for what they considered a huge blunder. Not to mention, they gave an Italian firearms company the most coveted sidearms contract on the planet…

Fast forward to 2016, where a fresh clash of the titans is underway to decide which semi-automatic pistol will follow the M9 in the history of US military firearms. The new contract competition, called the MHS (Modular Handgun System), calls for a few specifics in terms of accuracy and accessories, though there are plenty of popular models that fill these criteria. 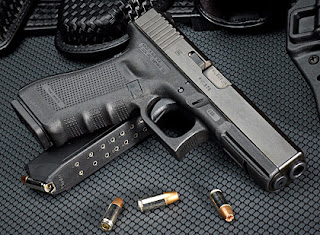 It’s been said many times but bears repeating, the Austrian-made Glock revolutionized the handgun forever with its polymer design.

Early detractors made fun of it for looking like a “block” of plastic, but most have since been won over by the Glock’s simple, light-weight, and nearly indestructible design. And judging by how many look-alikes have flooded onto the market, many shooters have come around how the Glock’s appearance too.

Thus far, all reports regarding the Modular Handgun System contract report Glock being solidly in the running, but there’s wide disagreement on which particular model is being considered. Perhaps Glock’s strategy is to let the USAF dictate the caliber. Smith & Wesson is a legendary name in firearms history, and the M&P lineup does the name proud at a price point that most shooters can afford.

With a state of the art polymer frame, slim profile, and an empty weight of just 24oz., there’s a lot more to like about the M&P than just the price. In fact, lots of experienced shooters say this model belongs right along side Glock, and Sig Sauer when it comes to performance, reliability, and design.

Certainly, the 17-round magazine gives you plenty of firepower. The M&P is heavier than the Glock 17 by about 3 ounces, which is not significant enough to make a difference with most shooters. The Springfield XD series has quickly become a fan favorite among pistol enthusiasts, approaching even the Glock in popularity.

The XD is another polymer frame gun, much like the Glock, with ambidextrous magazine releases, a grip safety, and a trigger action safety. The sharp 3 dot sights are easy to get comfortable with and even the shorter models are highly accurate.

When you put the XD and a Glock side by side, the comparisons just can’t be avoided. The XD is a bit narrower than the Glock, and the controls and safety are slightly larger than those on the Glock. The .40 XD model comes equipped with two 13 round magazines, so you’ve got plenty of firepower for the range. If you haven’t noticed, basically every gun on this list is strikingly similar. The Beretta APX clearly follows suit. In fact, the APX has been designed from the ground up to win Beretta’s US-based manufacturing the coveted MHS contract.

After years of its status as stalwart, driving firearm trends, Beretta seems to be diving straight into a very hot (and crowded) me-too territory.

On the flip side, the APX is a very top notch polymer handgun, with engineering and reliability that sure to be best-in-class. Plus, you get the comfort and status of seeing the word Beretta on the side of it. This is a fairly new offering from Czech arms maker CZ, and stands out on this as one of the only hammer fire gun thus far. Thus it can be fired single to double with the hammer cocked. It also has a smooth double action pull on the first shot.

The P-09 also has a de-cocking mechanism that allows you to toggle back to double action with a round in the chamber.

Perhaps the standout feature of this gun is the ammo capacity, an impressive 19+1 rounds. Hopefully you can hit you target with that many rounds.

So, which one do you think we should use. Feel free to comment