It’s bad enough that President-Elect Donald Trump has had to deal with Democrats and their stenographers inside the mainstream news media ganging up together to constantly berate, smear and lie about him and his agenda before he even takes office, but when you find out that members of the Republicans Party were involved in schemes to hurt him as well, it denies belief in a Benevolent Being.

This needs to be stopped, at least among the members of the President-Elects own party, before it gets so out of control that it can’t be stopped.  Those involved within the ranks of the GOP should be singled out and excoriated in public.

[From: The Daily Mail]

It was me: Sworn Trump enemy John McCain admits HE handed smear dossier to FBI – as details surface of document’s bizarre journey from British former spy and diplomat

Sworn Donald Trump enemy John McCain admitted Wednesday that he passed the dossier of claims of a Russian blackmail plot against the president-elect.

The Arizona senator issued a public statement amid mounting questions of his exact role in the affair – and how a document riddled with errors and unverifiable claims came to be published.

‘Late last year, I received sensitive information that has since been made public,’ he said.

‘Upon examination of the contents, and unable to make a judgment about their accuracy, I delivered the information to the Director of the FBI.

‘That has been the extent of my contact with the FBI or any other government agency regarding this issue.’

But the 2008 Republican loser, who disowned his party’s candidate weeks before the election, may have been far more intimately involved than that. 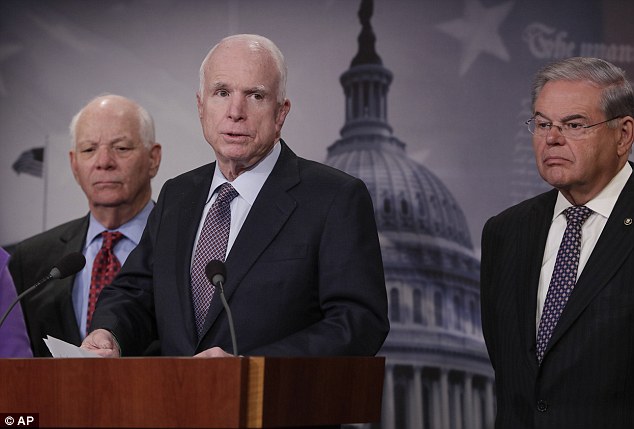 John McCain admits he handed the report w over to FBI Director James Comey late last year. The agency were first handed parts of it in August 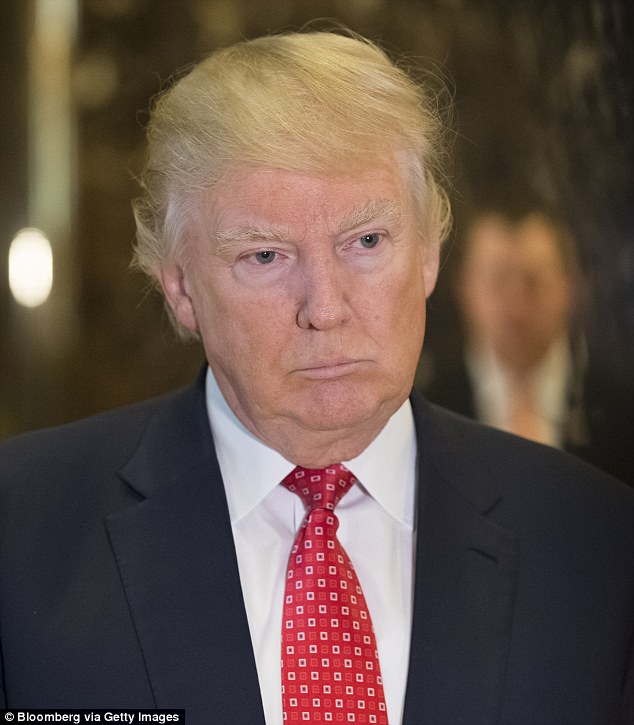 Donald Trump, pictured, has denied allegations contained in an explosive dossier compiled by a former British MI6 agent claiming on Twitter he is being subjected to a ‘political witch hunt’

The chain of how the document reached the FBI is not officially known.

However Carl Bernstein, the Watergate reporter who contributed to the first story about its existence, published by CNN on Tuesday afternoon, suggested that McCain was handed it by a former British ambassador to Moscow.

Bernstein told CNN: ‘It came from a former British MI6 agent who was hired from a political opposition research firm in Washington who was doing work about Donald Trump for both republican and democratic candidates opposed to Trump.

‘They were looking at Trumps business ties, they saw some questionable things about Russians, about his businesses in Russia, they in turn hired this MI6 former investigator, he then came up with additional information from his Russian sources, he was very concerned by the implications of it, he then took it to an FBI colleague that he had known in his undercover work for years, he took it to this FBI man in Rome who turned it over to the bureau in Washington in August.

‘And then, a former British ambassador to Russia independently was made aware of these findings and he took the information to John McCain – Senator John McCain of Arizona – in the period just after the election, and showed it to McCain – additional findings.

‘McCain was sufficiently disturbed by what he read to take it to FBI director James Comey himself personally, they had a five minute meeting the two men, very little was said, McCain turned it over to him and is now awaiting what the FBI’s response is to that information.’

The identity of the former British ambassador has not been disclosed.

Only one former British ambassador to Moscow remains in UK government service, Sir Tim Barrow, who went on to be Foreign Office political director and is now Britain’s ambassador to the European Union.

McCain’s long-standing opposition to Trump is well known although he only formally ended support for the Republican candidate in October, when the notorious ‘p****’ tape emerged. 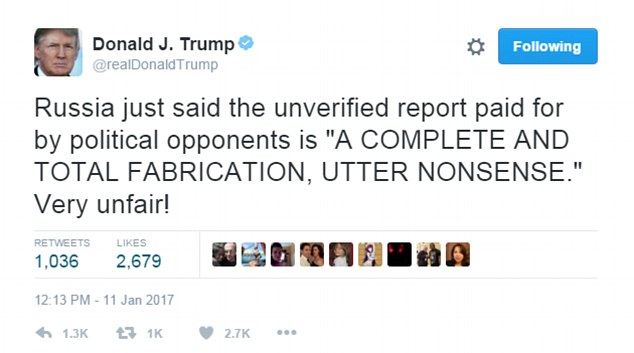 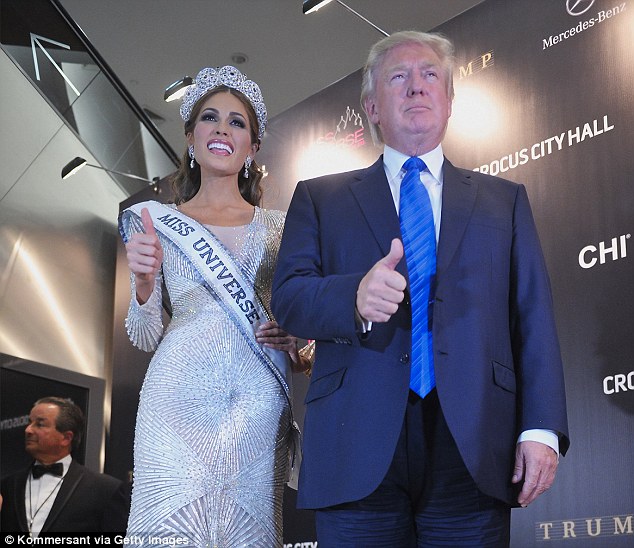 Trump on McCain: ‘He’s a war hero because he was captured’

The new information, which has not been independently verified, claims that Russian officials also gathered highly damaging information on Trump, but only released the details attacking Clinton through the WikiLeaks website.

The Kremlin has denied all of the allegations, while Trump tweeted: ‘FAKE NEWS – A TOTAL POLITICAL WITCH HUNT’.

However, McCain was so concerned about the information contained within the 35-page dossier, which included allegations that Trump had hired prostitutes in Moscow to urinate on a bed that had previously been used by US President Barack Obama and his wife Michelle, that he passed the information onto the FBI

CNN reported that intelligence chiefs had presented Trump with a two-page summary of the dossier late last week following a briefing with President Obama.

It is not known if it included the most salacious details.

Trump has consistently denied that Russian intelligence agencies had launched a massive cyber attack ahead of last November’s election.

The dossier which McCain passed to FBI Director James Comey was compiled by the former MI6 man.

The memos describe sex videos involving prostitutes filmed during a 2013 visit by Trump to a luxury Moscow hotel, supposedly as a potential means for blackmail.

One claim, that special counsel to Trump Michael Cohen met with Kremlin officials in Prague in August 2016 has been branded as ‘fake news’.

Cohen denied that he was central ‘to the ongoing secret liaison relationship between the New York tycoon’s campaign and the Russian leadership’.

Cohen tweeted a photograph of his passport and said he had never visited Prague.

According to reports, the former MI6 man had been hired to conduct ‘opposition research’ on the Trump campaign by first Republican enemies of Trump, then Democratic ones.

Russia denied the claims, with President Vladimir Putin’s spokesman Dmitry Peskov telling journalists: ‘The Kremlin does not have compromising information on Trump.’

The Kremlin spokesman called the dossier a ‘total fake’ and ‘an obvious attempt to harm our bilateral relations’.

Donald Trump’s transition team has repeatedly denied allegations that it had received any help from Moscow. 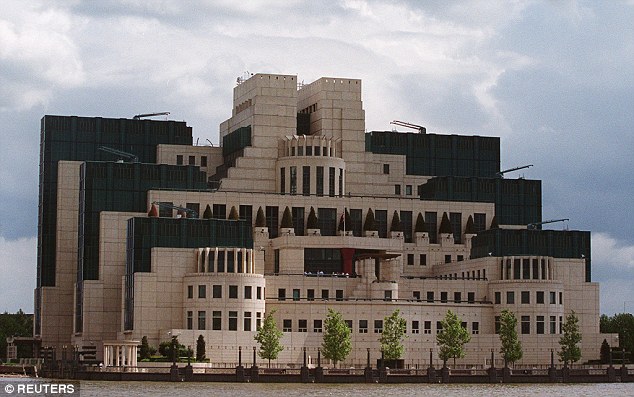 The dossier was compiled by a former member of the British Secret Intelligence Service, known as MI6, based in Vauxhall Cross in central London, pictured

Buzzfeed followed up a report by CNN which disclosed the existence of the explosive dossier, but only gave a brief outline of the contents.

The 35-page document, which had been collated by a former British Secret Intelligence Service agent had initially been handed over to the FBI in August.

Buzzfeed’s Editor-in-Chief Ben Smith wrote an email to his staff shortly after publishing the document. 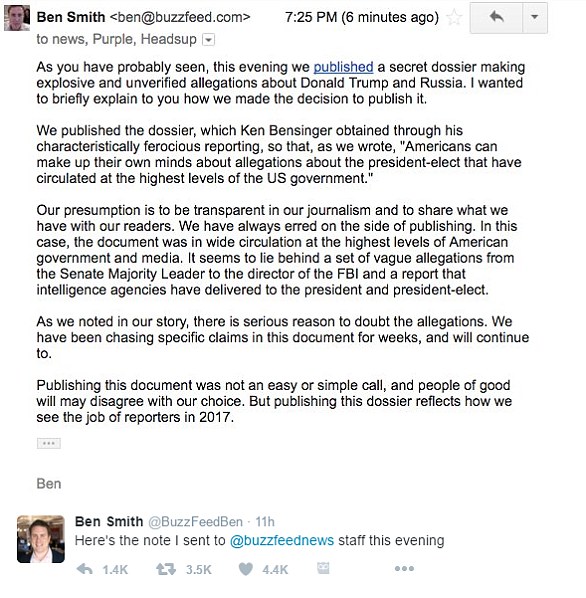 He justified the decision to release the information to allow Americans ‘to make up their own minds about the allegations’ which had been circulated at the ‘highest levels of the US government’.

Smith claimed publishing the dossier was an example of ‘transparent’ journalism.

Further down in his memo, he appeared to discredit his own story as ‘there is serious reason to doubt the allegations’.

He said Buzzfeed had been trying to stand up the allegations for ‘weeks’ – suggesting that it had failed to do so. Both the New York Times and the Washington Post said they had been handed the material and been unable to verify it.