Lakechia Schonta Stanley, 34, of St. Louis, Missouri has been sentenced to 78 years in prison after investigations revealed that she had been severely abusing her children, finding her guilty on 34 felony counts.

Stanley confessed to what prosecutors described as “systematic torture” in which she brutally beat, whipped, and waterboarded her children. The woman’s husband, Andrew Rui Stanley, 30, pleaded guilty last year to 42 felony counts on related charges, plus submitted Alford pleas on additional counts. He was sentenced to 160 years in prison. 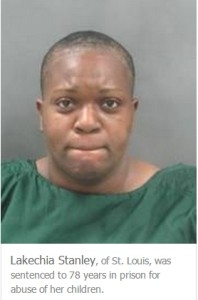 In October 2011, the abuse was first revealed by one of Stanley’s children while at school when she began complaining of bad pain in her arm. The school librarian examined the girls arm and noticed it was cold and hard to the touch, such as when rigor mortis sets in due to lack of blood flow to the body.

The girl was transported to the hospital immediately where it was determined that severe trauma to the girls arm was a result of the girl being beaten with a baseball bat by her mother because she didn’t clean the kitchen as quickly as Stanley wanted her to.

The girl, who was 10 at the time, also revealed to investigators that her younger sister, who was only 8, had also been subjected to the severe abuse. Why? Because the child had taken too long in the shower.

“What the defendant did to three of her own children far exceeds the definition of child abuse and amounts to systematic torture,” wrote assistant circuit attorney Tanja Engelhardt to the judge in a sentencing document. “She was supposed to be their mother, the one person they could trust. Instead she became a symbol of betrayal and fear, using every tool at her disposal to beat and torture her own innocent children.”