During the campaign, Donald Trump promised to increase the number of jobs significantly.  And he has.  Not only did he beat Wall Street jobs estimates, he beat it by 33% and Wall Street was expecting a lot of jobs.  Their estimate was 200,000 jobs but president Trump decided to make it a yuge jump and he delivered 298,000.

My guess is that the democrats are soiling their diapers over this and the fascist Nazis are making their hotel reservations so they can protest Trump’s 2021 inauguration.  People always vote for jobs and the economy, both of which are finally showing life after eight years of Obama.

Trump tweeted a self-congratulatory note, calling the number ‘much more than expected!’

HE HAS GOOD REASON TO SMILE.  THE PLAN IS WORKING

This comes just a day or two after Exxon Mobile announced that they will be hiring 45,000 new employees. 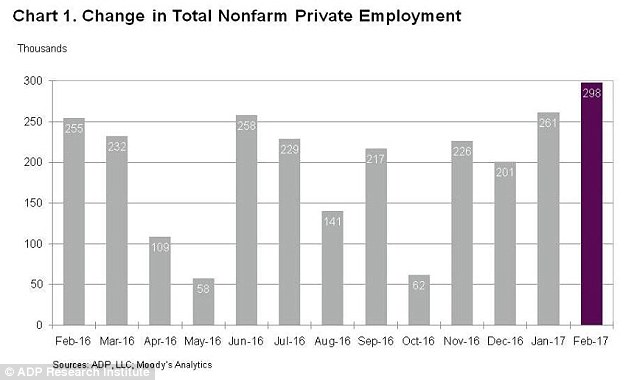 The Department of labor numbers come out on Friday and don’t be surprised to see that number climb over 300,000.

He also wrote Wednesday on Twitter about another similar measure, citing numbers from a new LinkedIn workforce report that showed strong job-adding numbers from January and February.

Those months ‘were the strongest consecutive months for hiring since August and September 2015,’ the president tweeted, mirroring the report’s language.

Construction jobs increased by 66,000 in February, and the manufacturing sector added 32,000.

Trump has pledged to dramatically improve the U.S. employment market in those sectors as he tries to lure businesses from overseas and stop jobs from fleeing across the border.