The media is in the middle of more fake news, so of course mentally challenged Chelsea Clinton had to step in  (Step in it is more like it)  While explaining his travel ban, Trump alluded to a conversation between Tucker Carlson and Ami Horowitz on crimes committed by refugees in Sweden.  Sweden had the lowest rape rate in Europe before they allowed Muslim refugees into their country.  They are now the rape capitol of Europe.  Sweden’s government takes great pains to hide the full extent of the problem and even cover up crimes committed by refugees.

Enter Chelsea Clinton, who once heard that 2 Brazilians drowned in the Pacific Ocean.  Clinton commented:

“I don’t know how many in a brazilian but it sounds like a whole lot.” 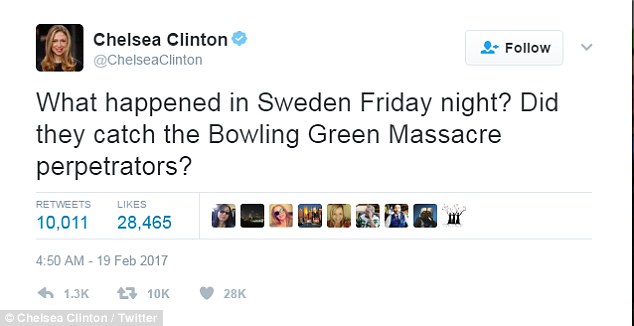 Friday night was when Carlson and Horowitz reported on massive amounts of crimes committed by refugees.  Kellyanne did mention a Bowling Green terrorist attack.  But there was not an attack but two Iraqi terrorists who entered the United States as refugees were arrested and charged with terrorism.  They received sentences of 40 years and life.  Sounds serious to me.  Of course Chelsea doesn’t consider rape a crime because as she says it must be okay cause daddy does it.

Now, who in the world would make up attacks?

Some Swedes suggested Trump’s remark was likely to have been based on a Fox News interview between host Tucker Carlson and documentary filmmaker Ami Horowitz which aired the night before.

Horowitz spoke about his recent film which explores the seemingly increasing crime rates in Sweden as a result of the country’s open-door policy.

This would be the third time the Trump Administration has been accused of referencing to fictitious terror attacks.

White House Press Secretary Sean Spicer referred to an ‘Atlanta attack’ earlier this month, but later corrected himself saying he had meant to say Orlando.