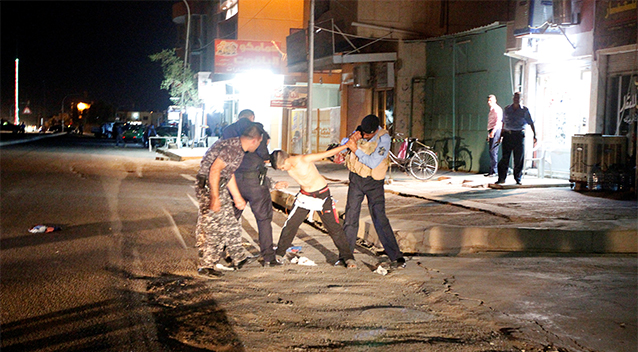 Police discovered a young boy age 12 or 13 who was just about to set off his suicide vest.  Police held onto his arms as the belt was removed from his body for disposal.  This comes on the heels of another boy of a similar age, who set off a vest in Turkey in the middle of an outdoor wedding celebration.  It has created fear that ISIS is now embarking on a plan to use young boys and possibly girls in suicide bombings.

In 2015, ISIS produced a propaganda video, showing young boys being trained for combat and suicide missions called “Cubs of the Caliphate.”

The boy is believed to have been planning detonating the explosives outside a Shia mosque but that report has not been confirmed as of yet.  Sources say the boy broke down in tears upon being arrested.

The arrest is believed to have taken place in Kirkuk’s Huzairan neighbourhood, Rudaw reports, but precise details on where the boy intended to stage his potential attack are unconfirmed — it has been claimed that the boy was planning to blow himself up outside a Shia mosque, however.

The device was later safely destroyed away from the public.

The incident came less than 24 hours after a child as young as 12 killed at least 51 people and injured 69 — 17 of them seriously, according to Turkish president Recep Tayyip Erdogan — in a suicide bombing at a packed wedding ceremony in the southern Turkish city of Gaziantep.

ISIS is now being labeled as cowards for sending brainwashed youths out to die for them.