A recent swarm of quakes in the Salton Sea makes seismologists worried that the big one could hit the San Andreas Fault within the next seven years.  The recent swarm was over 200 quakes at 2.5 or more.  Three were over 4.0.  Since 1932, when sensors were first set up, this was only the third such swarm but all three are relatively recent .  Swarms have been recorded in 2001, 2009 and of course 2016.  Seismologists have found that a major quake happens along the fault every 200 years but there has not been one for the past 330 years, so we are overdue for one.

“Any time there is significant seismic activity in the vicinity of the San Andreas fault, we seismologists get nervous, because we recognize that the probability of having a large earthquake goes up.” 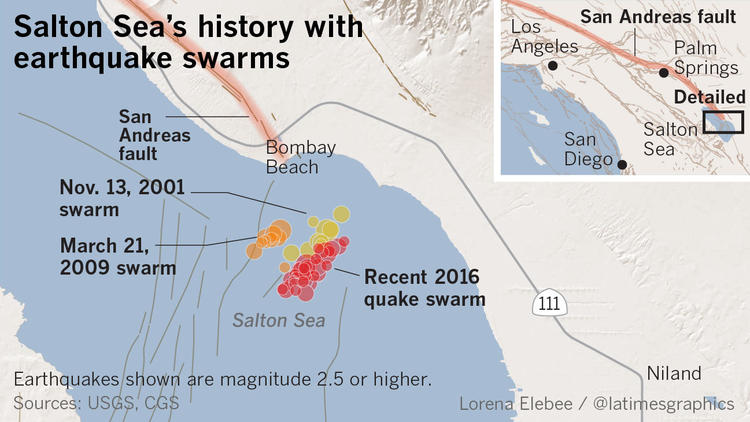 From The LA Times:

The San Andreas fault is even closer to where Monday’s earthquake swarm hit — less than four miles away.

“When there’s significant seismicity in this area of the fault, we kind of wonder if it is somehow going to go active,” said Caltech seismologist Egill Hauksson. “So maybe one of those small earthquakes that’s happening in the neighborhood of the fault is going to trigger it, and set off the big event.”

And that could set the first domino off on the San Andreas fault, unzipping the fault from Imperial County through Los Angeles County, spreading devastating shaking waves throughout the southern half of California in a monster 7.8 earthquake.