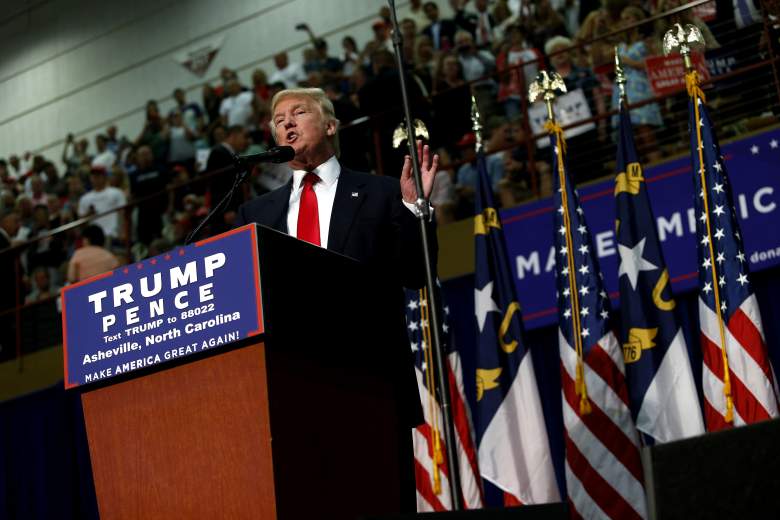 A woman claimed that a man who was supporting Donald Trump punched her in the jaw and knocked her down.  Eventually, she reported it to the police.  The police then put a warrant out for the man’s arrest.  The media has been in frenzy playing this up as one of Trump’s deplorables.  Not since the days of “The gentle giant” theme of the lamestream press have we seen such dishonest reporting.  The woman, , Shirley Teeter of Asheville, has now appeared on almost every leftwwing station in the United States.

Then the witnesses came forward and they told a totally different story.  After that came a video that knocked the woman’s story flat on it’s ass.  The accused, Richard L. Campbell, who is 73 years old had to be led by his wife because he cannot see well.  In fact, you can see him stumble when he couldn’t see the curb.  He is being led away from her and the accuser followed the man and from behind, grabbed his shoulder.  He instinctively raised his arm and the woman fell backwards.

Mr. Richard Campbell is 73 year old retired electrical engineer who has lived his entire life in South Carolina. He has three daughters and seven grandchildren. Mr. Campbell suffers from cataracts and is of poor vision. He is also on various medications including heart medication.

Mr. and Mrs. Campbell traveled to Asheville, NC for the weekend of September 10, 2016 to celebrate their 50th wedding anniversary The Campbells decided to extend their vacation in Asheville when they learned that Donald Trump was coming to the civic center. The couple attended the Trump rally peacefully. As they exited the rally, approximately 1,000 protesters were allowed to surround the exits of the Civic Center. Many of these protestors hurled profanities and other insults at the Rally attendees as they left. Mr. Campbell and his wife observed what they believed to be saliva on their clothing as they passed through the crowd, presumably from protestors.

Mr. Campbell was led by the left hand by his wife as they exited the building and made their way single file through the crowd. As they left, Ms. Shirley Teeter approached Mr. Campbell from behind and grabbed him on the left shoulder. Mr. Campbell reflexively moved his arm to release himself from Ms. Teeter’s grip. Ms. Teeter then fell backwards onto the ground.

Ms. Teeter has given several media interviews stating that she was “punched in the face”, “sucker punched” and “punched in the jaw”. She claims she suffered severe injuries requiring treatment at Mission Hospital. She also claimed that she had engaged Mr. Campbell in a discussion about living in Russia and he “sucker punched me”. (WLOS interview of 9/13/2016). She has also repeatedly denied ever touching Mr. Campbell.

Fortunately, witnesses have come forward which have disputed Ms. Teeter’s account and have stated that she was in fact the aggressor by first grabbing Mr. Campbell. Video has also surfaced which shows Mr. Campbell walking through the crowd led by his wife by the hand. He stumbles at one point due to his poor vision. The video shows Ms. Teeter approaching Mr. Campbell from behind and reaching up her arm to grab his left shoulder from behind. The video clearly shows that Ms. Teeter did not engage Mr. Campbell in any conversation prior to the incident despite her claims. This video can be found at:https://www.facebook.com/bill.fiesser/videos/10208124579330852/

Ms. Teeter, in spite of her claim of injuries, was later photographed at the rally smiling with other protestors. https://www.facebook.com/photo.php?fbid=654834511342026&set=p.654834511342026&type=3&theater
She does appear to have a bandage to her left elbow where she fell. Multiple video and photographic evidence of Ms. Teeter’s face the following day show no bruising or other trauma to Ms. Teeter despite her claim that she was “punched in the jaw”. Photographs of Mr. Campbell’s hands also so no sign of trauma. As Mr. Campbell is on blood thinner, he bruises easily and with little pressure applied.

In any event, Mr. Campbell looks forward to having this case heard in court. He hopes that more video and witnesses will come forward. If any wishes to provide this additional evidence, they can contact his attorney, Mr. Jack Stewart at (828) 253-5673.

Mr Campbell is threatening to sue Teeter for filing false police charges and defamation.  I hope he does.