Christopher Marquez, a decorated ex-Marine who fought in Iraq was attacked by a group of five teenagers who had harassed him as he was eating a meal in a local McDonald’s.  They shouted in his face and asked him if black lives matter.  When he didn’t answer, they began calling him a racist.  They finally left and Marquez finished his meal.  As he was walking to his car, he felt something hit his head and then he blacked out.

When he awoke, he realized that his pants were torn and he had been robbed of $400 in cash, three credit cards, his VA medical card, school identification, metro card and driver’s license.

“I remember this group of teens harassing me while I was eating, they surrounded my table and kept on asking me ‘Do you believe black lives matter?’  Then they started calling me a racist. I can’t recall if they were saying anything else to me at this moment because the blow to my head really screwed up my memory.”

The manager of the McDonald’s, DeAnthony Mason, reviewed the security tapes for Marquez and they showed on of the youths hit Marquez over the he4ad and then the others joining in strip him of his possessions.

Marquez was involved in some very famous battles in Iraq.  He was awarded the Bronze Star for carrying his dead company commander’s body out from where his group had been ambushed in the Battle of Fallujah.  Marquez was also involved in the notorious fight known as “Hell House”.  Four soldiers were ambushed and unable to escape from the house they were in Marquez and Dane Shaffer rushed in and got all four out, carrying them one at a time.  For that act of bravery, he was immortalized in bronze.

Here is a picture of that rescue:

Maquez is the one on the far left.

Here is a statue of that rescue as it sits in California: 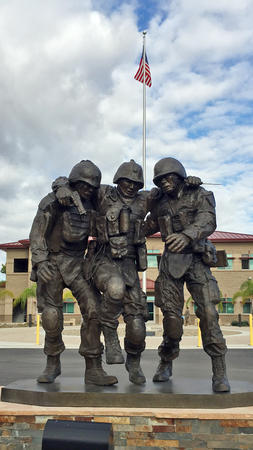 Marquez was attacked by thugs not fit to shine his shoes.