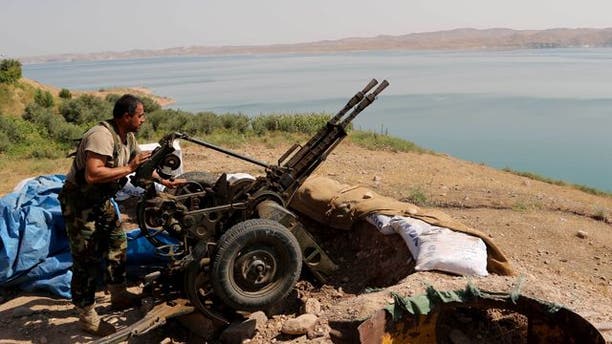 U.S. airstrikes again pounded Islamic militant positions Monday in support of Iraqi security forces and Kurdish peshmerga fighters battling to wrest control of the vital Mosul Dam, amid conflicting claims over whether the structure was back in government hands.

A senior official in the peshmerga forces told Fox News earlier Monday that Iraqi and Kurdish troops had regained control of the dam. Another official told The Associated Press the troops “fully liberated” the dam Monday and “hoisted the Iraqi flag over it.”

“It’s not over yet,” the official said. “We knew this would be long.”

The Islamic State group, which two weeks ago captured the Mosul Dam spanning the Tigris River just north of the city of Mosul, also denied the government claims, insisting it was still in control of the facility.

Local sources told Fox News that the only fighting still ongoing is for a small dam to the west of the main facility, though a source said government forces expect to retake it shortly. The source said movement by the Iraqi  and Kurdish forces has been slowed down due to fears of planted bombs.

The retaking of the dam, if successful, would mark the first major victory for the Iraqi and Kurdish forces battling the Islamic militants since U.S. airstrikes began earlier this month.

It could significantly boost their morale as they try to free territory overrun by the Islamic State in a blitz this summer. Also, the dam and its broader complex hold great strategic value as they supply electricity and water to a large part of the country.

Army spokesman Lt. Gen. Qassim al-Moussawi said the dam itself was secured by Kurdish peshmerga troops and Iraqi security forces on Monday but that the southern side of the complex remains contested and that fierce fighting is underway to free that area.

The dam’s seizure by Islamic State militants on Aug. 7 was part of a string of victories by the Sunni radical group as it looks to expand its hold in northern Iraq, driving back Kurdish forces, sending minority communities fleeing and unleashing a wave of violence over a territory straddling the Syria-Iraq border.

Alarmed by the militants’ advance, the U.S. and Iraqi airstrikes pounded the area over the past two days. U.S. officials told Fox News that American forces conducted nine strikes on Saturday and another 14 on Sunday in efforts to help the Iraqis retake the dam.

However, the Sunni militants remain in control of vast swaths of northern and western Iraq, including the city of Mosul, as well as much of northeastern Syria.

Some 1.5 million people have been displaced by fighting in Iraq since the Islamic State’s rapid advance began in June. The scale of the humanitarian crisis prompted the U.N. to declare its highest level of emergency lasts week.

The decision to launch airstrikes marked the first direct U.S. military intervention in Iraq since the last American troops withdrew in 2011 and reflected growing international concern about the extremist group.

The White House sent a letter to Congress on Sunday saying that its air campaign in Iraq “is consistent with the president’s directive that the U.S. military protect U.S. personnel and facilities in Iraq, since the failure of the Mosul Dam could threaten the lives of large numbers of civilians and threaten U.S. personnel and facilities — including the U.S. Embassy in Baghdad.”