After dropping out of sight for a few weeks after releasing emails from the DNC, Guccifer2.0 is back with a vengeance.  He has published the phone numbers and the private emails of most of the democrats in the House: 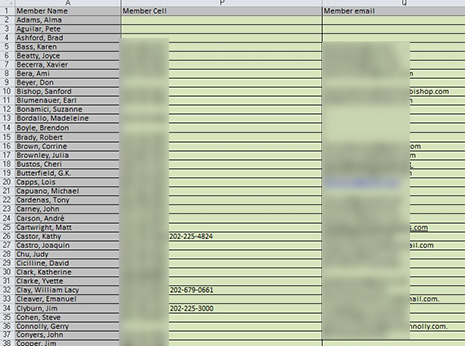 From The Smoking Gun:

In announcing the leak of the document, “Guccifer 2.0” reported that the spreadsheet was stolen during a hack of the Democratic Congressional Campaign Committee. “As you see I wasn’t wasting my time! It was even easier than in the case of the DNC breach,” the hacker wrote.

Along with the Excel file, “Guccifer 2.0” also uploaded documents that included the account names and passwords for an assortment of subscription services used by

In a message today, the hacker branded the U.S. presidential elections a “farce” that is “being settled behind the scenes as it was with Bernie Sanders.” He added, “I wonder what happened to the true democracy, to the equal opportunities, the things we love the United States for. The big money bags are fighting for power today. They are lying constantly and don’t keep their word. The MSM are producing tons of propaganda  hiding the real stuff behind it. But I do believe that people have right to know what’s going on inside the election process in fact.”

“Dear journalists, you may send me a DM if you’re interested in exclusive materials from the DCCC, which I have plenty of.”

Here is some of the info he has released from Pelosi’s personal computer: