The restaurateur responsible for a Cajun eatery in Louisiana hoped law enforcement would take advantage of an unusual discount offered during lunchtime, but says his eatery has since become a hot destination for gun enthusiasts. 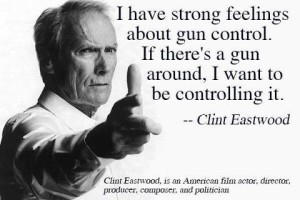 Bergeron’s Restaurant owner Kevin Cox says the plan was meant as a way of giving thanks to the local police. Little did he know, however, that the “Thank You for carrying your gun today. 10% Discount” sign displayed next to a menu of poboys at his Port Allen, LA establishment would attract other firearm owners as well.

Business is now booming at Bergeron’s Restaurant, and Cox says his pro-Second Amendment promotion is paying off.

“It makes us all feel better when state patrol, police and sheriff’s department come in and have lunch here because you know when they’re here we’re safe,” Cox told the Huffington Post. “And I realized that we have a lot of good people that carry a firearm in Louisiana — my cousins and relatives included — and I’m equally as safe when they’re here, and I need to encourage that.”

Louisiana is an open carry state, which means lawful gun owners can legally go out in public with their pistols in tow. Select establishments across the United States have recently been banning customers from bringing guns into businesses, though, and Cox names one such restaurant — Mexican chain Chipotle — in explaining some of his reasoning.

Cox says he has about 500 customers a day, and the notice brings him about 12-20 discount diners a day who carry in their guns.